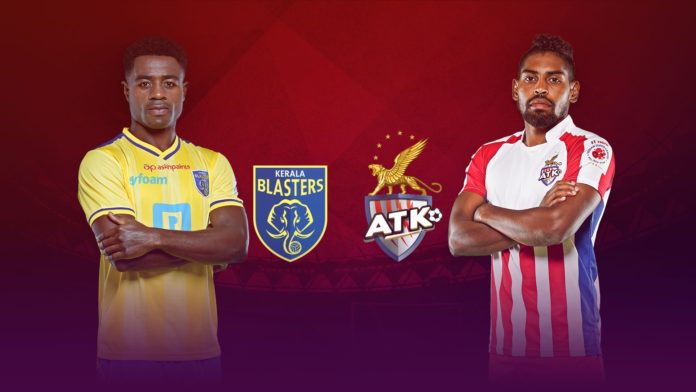 Kerala Blasters to host ATK at the Jawaharlal Nehru Stadium in Kochi in the first game of the season of the Indian Super League 2019-20.

The Indian Super League 2019-20 is all set to kick-off today on Sunday (October 20). Kerala Blasters would be taking on ATK in the reverse fixture of last season opener as ISL is all set to kickoff after a seven month long break. This match would also see managers Antonio Habas and Eelco Schattorie going head to head for the first time.

Both the side have taken a similar approach to bid for the title this season. However, while ATK have still retained some of their most important players from last season like John Johnson, Edu Garcia, and Pronay Halder, Kerala Blasters have brought in a new core to compete and start with a clean slate. They will have last season’s NEUFC’s star Bartholomew Ogbeche leading the lines.

ATK has been quite in getting some of the proven domestic talents forward, which has given them the scope to stuff in their defence and midfield with some of the best personnel for the league. In the likes of Carl McHugh and Johnson, the side has two of the best centre-half pairs and with A-League MVP Roy Krishna coming to the side, their scoring prowess has improved manifold.

Kerala Blaster, who will enjoy a home crowd advantage, will look to begin the campaign on a winning note. ATK, on the other hand, will begin their battle without striker Jobby Justin and defender Anas Edathodika. Both the players are ruled out as they serving their suspension. The Indian Super League 2019-20 fixture Kerala Blasters FC vs ATK will commence at 7:30 pm.

Kerala Blasters have revamped their entire foreign contingent, bringing in some established names like Bartholomew Ogbeche, Gianni Zuiverloon, Mario Arques and Raphaël Messi Bouli. They also have a few young Indian stars like Sahal Abdul Samad. But the absence of Sandesh Jhingan will be a huge blow for them.

The Indian Super League 2019-20 will kick off with a gala opening ceremony, including performances by Bollywood actors by Tiger Shroff and Disha Patani, at the Jawaharlal Nehru Stadium in Kochi on Sunday.

What time does the Indian Super League 2019-20 Opening Ceremony?

Even though the opening ceremony will start 6:00 pm at the stadium, the deferred live on TV will be from 6:45 pm onwards. Gates at the Jawaharlal Nehru Stadium will open at 4 pm on 20th October.

The ISL 2019-20 Kerala Blaster vs ATK match is scheduled to start at 7:30 pm. The match between the Kerala Blaster and ATK will be at the Jawaharlal Nehru Stadium, Kochi.

Where to watch Indian Super League 2019-20 Kerala Blaster vs ATK match on TV?

The live streaming of Indian Super league 2019-20 will be available on Hotstar and Jio TV.

Previous articleThe AMD Ryzen 9 3950X destroys Intel Core i9-10980XE in benchmarks
Next articleManchester United vs Liverpool: Prematch analysis and when and where to watch the match live