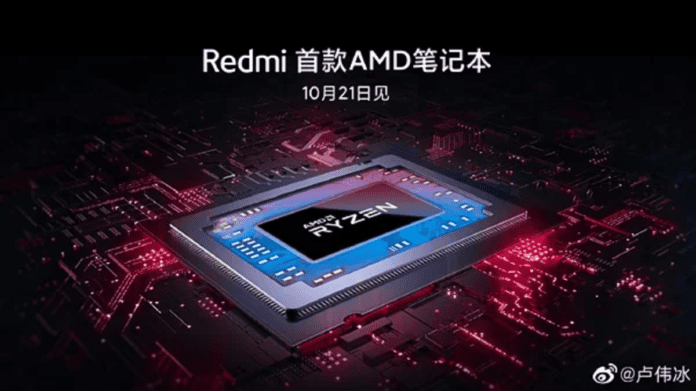 The Chinese giant is always known for its wide range of products in China and around the globe. In China, they have all kinds of electronic products and smartphones and yes their laptop lineup termed as RedmiBook. The RedmiBook series offers portability and performance in a small form factor.

Being equipped with the latest hardware, the RedmiBooks prevails a good impact on laptop sales in China. Recently they announced the RedmiBook 14 with 10th Gen Intel Comet Lake CPUs and now they seem to tie up with AMD for their laptop series.

Xiaomi today launched the Redmi 8 and Redmi 8A for the Chinese market, which previously made the global debut in India. Besides this, the company also announced that they will launch another RedmiBook that will be unveiled on 21st October.

A Ryzen CPU on top of a RedmiBook laptop will make sense for budget-minded people and will give a powerful laptop at a low price than the Intel ones. Xiaomi’s vice-president, Lu Weibing did mention the upcoming laptop will be a value for money one but did not reveal any other details regarding the notebook.

Gizmochina is confident from their reliable sources that the first AMD-powered RedmiBook will feature the Ryzen 5 3550H processor. The APU is very popular for budget gaming laptops and will be a great option as this is the latest APU from AMD in the laptop market currently by AMD.

For the graphics, we have the Radeon Vega 8 Graphics with 8 GPU cores and with 1200 MHz graphics frequency.

If everything is right then in a compact form factor if we get such a powerful APU then this will be a great option for budget buyers. Also, the partnership between AMD and Xiaomi might lead to more powerful notebooks in future. On 21st of this month, we can get a closer look at this upcoming laptop powered by AMD.