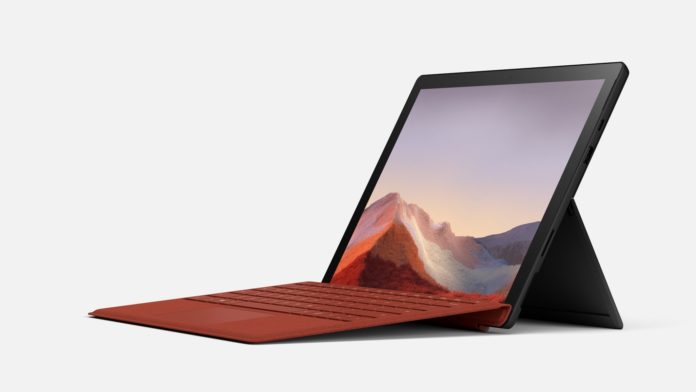 With days, the Surface lineup is just getting better and better, the alleged Surface Pro 7 that was leaked weeks ago has got almost the same specs during the launch. It remains the same compact and portable 2-in-1 by Microsoft but has got a lot more potential this time.

The Microsoft Surface Pro 7 is the latest in its flagship line of laptop/tablet hybrids, also this time it brings the most-asked feature – the USB Type-C port. It packs a stunning 12.3-inch PixelSense display with 2,736 x 1,824 resolution. The screen has 267PPI along with a 3:2 ratio, much like its predecessor Surface Pro 6.

This 2-in-1 laptop/ tablet hybrid is much more powerful than ever featuring Intel’s latest 10nm 10th Gen Core i3, i5 and i7 chips. These latest Intel offerings are both efficient and powerful on CPU horsepower as well as GPU performance with its integrated gen 11 Intel Iris Plus graphics.

The OS has been optimized this time especially for this hybrid product by Microsoft. It is capable of pulling various pieces of information on a subject “together” in a concise, cohesive yet straightforward manner.

Microsoft has even introduced a new Edge version, which is tentatively designed to facilitate battery life and productivity while using a 2-in-1 laptop. Speaking of other hardware specs, you can choose from a 128GB SSD to a whopping 1TB SSD, and you also get the choice of 4GB, 8GB or 16GB RAM options according to your needs.

During the event, Microsoft’s Robin Seiler spent a lot of time of the presentation focusing on the new power of the Surface Pen, in fact, this is the only Microsoft product to have what can be called a full-sized Surface Pen.

Not only is it capable of in-line editing in Word, like striking through a line in a document to make it disappear, but also features Ink Editing in MS Excel. This is a new feature helps to fill cells with handwriting, which can then be converted to text.

The Surface Pen can also be used to update cell data in real-time, and also erase it with appropriate gestures.

The Surface Pro 7 is compatible with its corresponding Surface Type Keyboard accessory and this attachment has key travel of 1.3 mm this time. This 2-in-1 or hybrid tablet has studio-grade mics for clear crisp audio and to enhance the application of earphones.

Microsoft has priced this new ultra-portable 2-in-1 at $749. Pre-orders for the Surface Pro 7 has already begun and shipping will start be starting from October 22nd onwards.