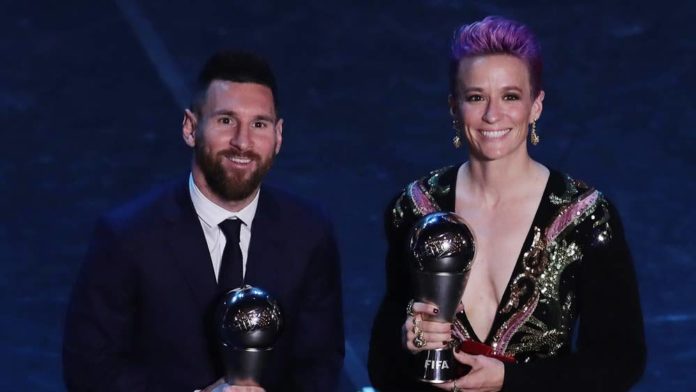 Lionel Messi has been crowned as FIFA Men’s Player of the Year at their annual The Best awards ceremony in Milan on Monday. Virgil Van Dijk came second with Cristiano Ronaldo in the third position of the voting results.

It is the first time Messi has won FIFA’s flagship individual award since it split from the Ballon d’Or and rebranded in 2016. He last won a major individual award in 2015. This is his 6th major honour.

Cristiano Ronaldo won The Best Men’s Player award in 2016 and 2017. And then eventually Luka Modric broke the Ronaldo-Messi duopoly on the major individual awards when he won in 2018.

Megan Rapinoe has won the Women’s Player at the FIFA Awards after a phenomenal year. She won the Golden Boot and Golden Ball as she led the USA Women National Team to Women’s World Cup glory. She fought off close competition from Alex Morgan and Lucy Bronze to win the award.

Liverpool’s’ Van Dijk who came second in the ranking, won the UEFA Men’s Player of the Year due to his major contribution in Liverpool getting their hands on the European trophy.

Messi told reporters: “It has been a long time without winning an individual prize. It is an award that I have for the first time and it is good to have it.”

Van Dijk told the reporters: “The people who vote made a decision and you have to accept it,” Van Dijk told reporters. That’s just the case and as players, you can’t compare me and Messi because it’s totally different. I’m very proud to be here.
Disappointed? You can’t be disappointed. I’m just very happy to be here, to be in the team of the year, after the hard work and the good work we put in last year. Today, I unfortunately, didn’t win but I’m not disappointed.”

Cristiano Ronaldo skipped the FIFA Awards as he fell behind Messi for the Men’s Players rankings. After the awards ceremony, he posted a philosophical message on Instagram: “Patience and persistence are two characteristics that differentiate the professional from the amateur. Everything that is big today has started small. You can’t do everything, but do everything you can to make your dreams come true. And keep in mind that after night always comes dawn.”

Lionel Messi is one of the best two of this generation. There’s no point denying that. But frankly enough, Messi was not at his prolific best. If he had so, Liverpool couldn’t have made that historic 4-0 comeback. He also didn’t win the Copa America with his national team.

On the other hand, Van Dijk was the PFA Player of the Year for his outstanding performance in the European League. He also helped Liverpool win their 6th European trophy. And in the international level, he took Netherlands to the UEFA Nations League final.

Cristiano Ronaldo did one better than Van Dijk in the international-level. He won the inaugural Nations League with his country Portugal and also won the Serie A with Juventus.

I’m not doubting Messi’s credibility. He is one of the best players of all time. But, maybe, someone else deserved this year’s award even more than him.