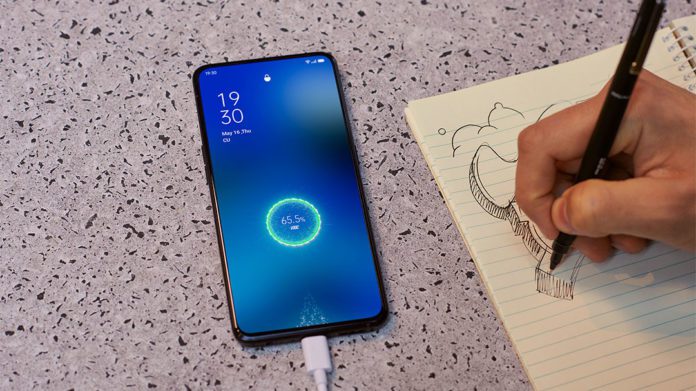 Chinese Smartphone giant Oppo unveiled its new charging tech that is here to break some records and build a new benchmark. Last year Oppo introduced the 50W SuperVOOC charging technology on the R17 Pro and it was insane, charging your device in less than an hour.

With more R&D and improvements in its tech, Oppo has officially showcased the SuperVOOC 2.0 Fast Charge technology. This is the fastest charging technology ever introduced by Oppo, not to forget about Vivo’s 100W charging tech.

The SuperVOOC 2.0 Fast Charge technology is now official and is likely to be available sooner. The new charging tech can charge your smartphone (with 4,000mAh battery) from 0% to 27% within 5 minutes only. Also, the battery can fully be charged in just 30 minutes, going from 1% to 100% in just 27 minutes.

Charging at 65 Watt is not a joke and hats off to Oppo that has achieved this tech and will ultimately help you charge your device in 30 minutes only. The Gallium Nitride (GaN) semiconductors have helped shorten the charging time and have further reduced adapter size, which is more helpful because VOOC chargers are quite large in size.

The VOOC Flash Charge 4.0 is the successor to the popular VOOC Flash Charge 3.0 which we find in most of the Oppo and Realme devices. The 4th version that supports charging at up to 30W will allow you to charge your 4000mAh smartphone from 0-100% in 73 minutes.

It is 12% faster than the VOOC 3.0 which nearly took around 90 minutes to charge a 4000mAh smartphone. You can charge up to 67% in just 30 minutes which awesome! This is a healthy upgrade considering the fact that the tech will be available in most of the mid-range smartphones.

On the other hand, the Wireless VOOC Flash Charge will also operate at 30W. This tech will allow you to charge your 4,000mAh battery smartphone in under 80 minutes only.

Oppo Reno Ace will be the first smartphone to support the 65W SuperVOOC 2.0 tech on board. It is said to feature a 90Hz AMOLED screen, Snapdragon 855+ chipset, quad-cameras, and more. The smartphone is set to launch in China on the 10th of October and you can see this new charging tech in action.

Previous articleMotorola launches Smart Android TVs in India starting from Rs.13,999
Next articlePSG humiliate Real Madrid even without Neymar, Mbappe and Cavani in their team