India drew with Qatar. So what are India’s chances of qualifying for the 2022 World Cup? 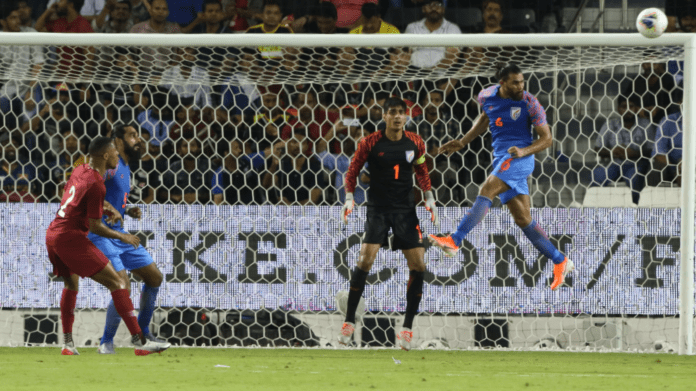 The draw with Qatar felt like a massive win for Igor Stimac’s side. Let’s take a look at how India are poised now for a World Cup 2022 berth!

The Indian football team held the Asian Champions Qatar for a goalless draw in the World Cup 2022 qualifier at the Jassim bin Hamad Stadium in Doha on Tuesday.

India were without their talismanic captain Sunil Chhetri against Qatar. Gurpreet Singh Sandhu took the captaincy role in the absence of Chhetri and played it to perfection. He was almost unbeatable under the Indian bars. He made a total of 11 saves throughout the match and gave his side a hard-earned 1 point.

Sunil Chhetri tweeted after the match: “Dear India, that is my team and those are my boys! Cannot describe how proud I am at this moment. Not a big result for the table, but in terms of a fight, as big as it can get. Huge credit to the coaching staff and the dressing room”.

India’s hero of that famous draw, goalkeeper Gurpreet Singh Sandhu told the AIFF: “I feel extremely proud of the team for our performance against Qatar. The team-effort helped us achieve the result. It will help us immensely in the qualifiers.”

Qatar are ranked at 62 in the world while India currently sit in the 103rd spot in the list. India were coming into the match after a last-minute loss of 1-2 in the hands of Oman in the 1st match of the FIFA World Cup 2022 qualifiers. Probably that’s why the draw felt like a huge win for the in-transition Igor Stimac’s side. Qatar had more than two dozen shots on the Indian goal out of which at least a dozen were on target. But the Indian goal was guarded by the safe hands and feet of Gurpreet who made many valiant saves. On the other hand, India had just two shots on the opposition goal in the entire match.

Head coach Igor Stimac put in place a holding plan that centered on India playing a tight positional game and cut off spaces for the Qataris to operate in. To the credit of the Indians, they defended brilliantly, maintained their shape throughout and did not give any space to the speedy Qatari attackers. The plan almost worked to perfection.
Sahal Abdul Samad was brilliant in the midfield as he, on a few occasions, got the better of his opponents and sent fine passes to the likes of Udanta Singh who threatened with his pace through the right flank in the latter half of the match.

Igor Stimac’s side are now on 1 point after 2 matches. While Qatar have already qualified as the host nation, they currently sit atop the table with 4 points from 2 matches.
India will host Bangladesh in Kolkata for their next match of the World Cup 2022 qualifiers on 15th October.

What are India’s chances of qualifying for the World Cup 2022?

After the 1-2 loss against Oman, India’s chances of qualifying looked almost over. But the famous draw against Qatar have opened up new hopes for the new-look Indian side.

Four nations qualify directly from the Asian continent for the World Cup while the fifth team goes to a playoff with a nation from another continent. 46 nations compete for these four and a half spots from Asia.

India will have to win or finish second in the current qualifying group that also includes Qatar (who are already through as hosts), Oman, Bangladesh and Afghanistan.
Last time, India finished last in their group, managing only a 1-0 home win over Guam.

If India manage to qualify through the group stage then they will enter the next round of qualification which will involve the top 12 teams from Asia. These 12 teams will be divided into two groups of six each. If India want to make it to the World Cup 2022 they will, once again, have to finish in the top two to qualify. If they finish third they will have to play a playoff match.
But sadly, India have never reached this stage before.

The hopes are very high from this new-looked and improved Indian side. Though the chances of playing in the Qatar World Cup 2022 looks very bleak but still billions of Indians are keeping their fingers crossed after seeing such an impressive performance from the Indian team against a Qatar side who have scored against every Asian opponent they faced this campaign.