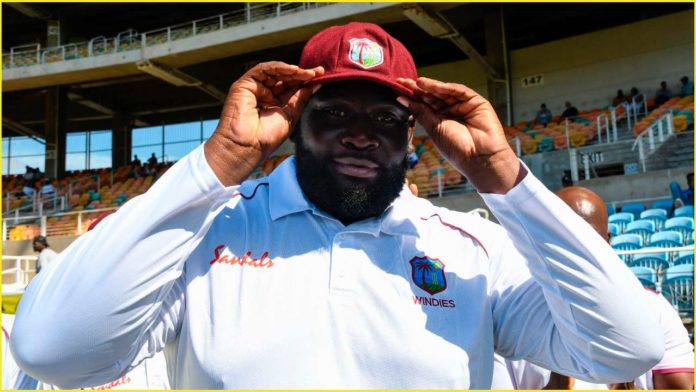 Rahkeem Cornwall, the 26-year-old all-rounder from Antigua weighing around 140 kilograms, became the heaviest Test cricketer ever when he was inducted in West Indies’ playing XI for the second Test against India. Rahkeem surpassed former Australia captain Warwick Armstrong, who weighed 133-139 kg, to achieve this feat.

Rahkeem Cornwall, who can hit big sixes at will and get some sharp bounce and turn with his off-spin, has been among the most consistent cricketers in the domestic circuit in the recent past. In West Indies Championships 2018-19, Cornwall picked up 54 wickets at a staggering average of 17.68 runs.

Representing Leeward Islands, Rahkeem has scored 2224 runs in 55 matches and picked up 260 wickets in his first-class career at 23.90. Rahkeem shot to limelight when he shone with his all-round skills in a tour game for West Indies Cricket Board XI vs India in 2016.

Apart from top-scoring with 41 in the 1st innings, Rahkeem Cornwall picked up the wickets of Virat Kohli, Cheteshwar Pujara and Ajinkya Rahane and went on to finish with a 5-wicket haul.

For the same team in 2017, he faced the touring England team and scored an important 59 runs in a partnership of 123, helping his team recover from 55-5 to 233. Cornwall once again played for the Cricket Board President’s XI against Pakistan in a warm-up game during their 2017 tour.

Cornwall came in for medium-pacer Miguel Cummins while wicketkeeper-batsman Jahmar Hamilton became the first cricketer from the US Virgin Islands to play at senior level for the West Indies.

West Indies skipper Jason Holder won the toss and opted to bowl against an unchanged India in the 2nd Test at Sabina Park. West Indies had two debutants in the form of Rahkeem Cornwall and Jahmar Hamilton.

Do check out: MS Dhoni is unavailable for the upcoming t20 series