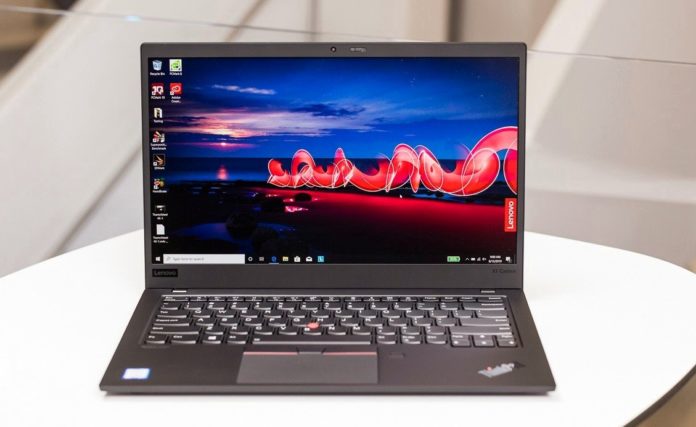 Originally announced back at CES 2019, Lenovo has reformed its ThinkPad X1 Carbon notebook a lot. Lenovo has made the laptop with thinner and lighter chassis as well as included Intel’s latest 10th Gen Comet Lake processors that come with up to six cores.

The Lenovo ThinkPad X1 Carbon Gen 7 turns to be the new flagship ultraportable laptop from the company. The laptop comes in a brand new carbon fibre chassis that is 14.95 mm thick and weighs just 1.09 kilograms.

The laptop has ultra-thin display bezels which feature a 14-inch IPS LCD display that comes with different resolutions. The new ThinkPad X1 Carbon has options of Full-HD with ThinkPad Privacy Guard, WQHD, or an Ultra-HD display panel. The best or the flagship model comes with a 4K display will feature 500 nits brightness and has VESA’s DisplayHDR 400 badge.

On the performance front, we have the Intel’s latest 10th Gen 14nm Core i5 or Core i7 processors codenamed Comet Lake. It features up to four or six cores as well as Intel’s UHD Graphics 620 iGPU. The laptop is coupled with 8 or 16 GB of LPDDR3 memory as well as up to 2 TB of NVMe SSD.

On the connectivity front, the 7th Gen ThinkPad X1 Carbon is equipped with Intel’s Wi-Fi + Bluetooth adapter that supports Wi-Fi 6, and an optional 4G/LTE Cat 9 or Cat 16 modem.

For I/O we have two Thunderbolt 3 ports, USB 3.0 Type-A connectors, a GbE with a new dongle, an HDMI 1.4 output and a 3.5-mm audio connector for headsets.

Among other significant changes, the inclusion of Dolby Atmos audio subsystem comprises of four speakers and four far-field microphones. For the webcam, we have the Lenovo will offer an IR-equipped 720p camera with the company’s ThinkShutter privacy cover.

Lenovo’s 7th Generation ThinkPad X1 Carbon is said to provide a huge 18.5 hours of battery life because of the 51 Wh battery. Though the company doesn’t clarify which of its models will provide such huge battery life, we can guess the top-of-the-line models to lack such battery life due to the presence of six-core CPU and an Ultra-HD display.

Lenovo has not yet revealed the exact date of availability nor the pricing details of all the models. In the coming days/months we expect these laptops to hit the market along with other Comet Lake powered laptops.

Previous article
Oppo Reno 2 series is launched today in India with quad-camera setup and much more.
Next article
Barcelona can announce Neymar today: Rakitic, Dembele to be swapped