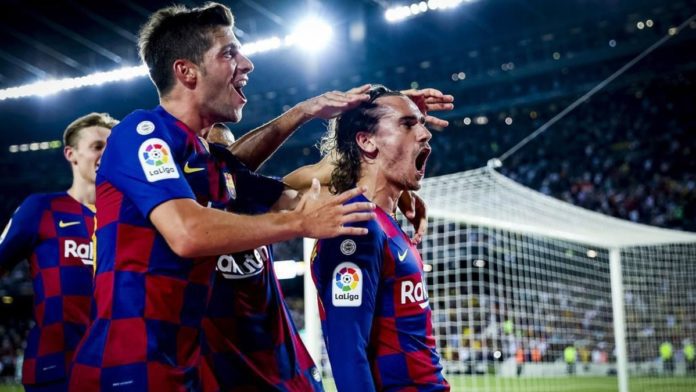 Antoine Griezmann had a disappointing debut last weekend as they succumbed to a surprise 1-0 defeat to Athletic Bilbao. But the €120million signing from Atletico Madrid – leading the line in the absence of Lionel Messi and Luis Suarez – announced himself to the Camp Nou faithful in style by scoring a brace and providing one assist.

Griezmann told Movistar: “We have improved a lot and we still have details to improve, although this is going in the right direction. In the end, when many important people are missing, everyone takes a step forward and today it has been like that. After a defeat, there are many comments and we had to work hard this week and in the end, we played a great game. We have enjoyed it.”

Griezmann said about his second goal celebration: “I saw Leo (Messi) do that in training and I copied him.
I like the ritual that LeBron James does before the games and I tried to copy him. I hope I can keep copying him for many more games, that would be the best signal.”

Carles Perez, Jordi Alba and Arturo Vidal were also on target for Barcelona. And for the visitors, Nabil Fekir and Loren Moron added two superb goals on either side of Barcelona’s five goals.

Ansu Fati, just 16-year-old was brought on to replace Carles Perez in the 78th minute. He became the second-youngest player to feature in LaLiga in the club’s history behind Vicente Martinez, who was 18 days younger when he played against Real Madrid on October 1941.
Ansu was born in Guinea-Bissau. He arrived at Barcelona in 2013 at the age of 10. Since then he has impressed at every level. He has also recently signed a deal that will keep him at the club until June 2022.

Ansu’s father said to RAC1 after the game: “I have seen him make his debut for Barca; I can die quietly. It will not be the first time, there will be many more appearances.”

Messi congratulated Ansu by posting an image of him hugging Ansu on Instagram and wrote: “Very happy to see the boys fulfilling their dreams of reaching the first team and playing at Camp Nou in an official match.”

Ernesto Valverde told a news conference via Marca about Griezmann: “I have to recognize that it was an important day for him due to the injuries we had. He reacted perfectly. He dropped into the midfield to help and he made an impact. We know that if attacking players trackback, we have a better chance of winning.”

Valverde also commented on Messi’s absence: “There wasn’t a positive feeling. He hasn’t had a relapse of the injury. We already said that we wouldn’t rush any player. What we wanted to avoid was a relapse.”

Gerard Pique also made his 500th Barcelona appearance against Real Betis on Sunday and he sits proudly among the greatest defenders in the club’s history. The most decorated Barcelona defender of all time, Pique trails only Lionel Messi and Andres Iniesta when it comes to the number of honours won. Though he has lifted no fewer than 29 trophies.

If you’re a Barcelona fan check this out:
1. Home Kit
2. Away Kit