Cristiano Ronaldo: “I hope to return to Madrid soon” 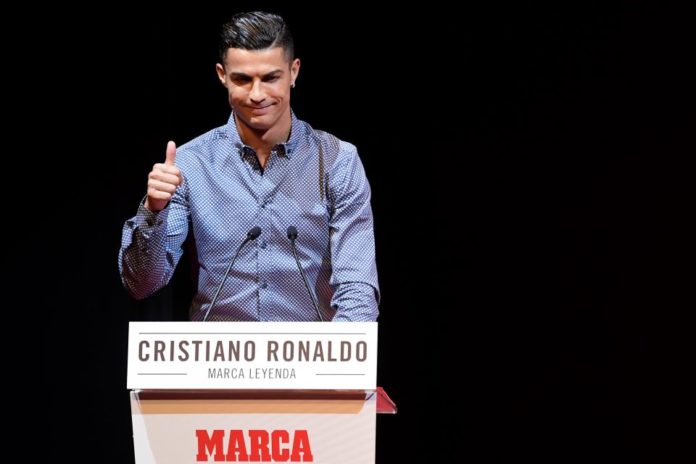 Cristiano Ronaldo insists that Juventus will win the Champions League, but he misses Madrid.

Ronaldo was honoured in Madrid with the Marca Leyenda. The five-time Ballon d’Or winner was awarded the accolade “for his successful career as a professional footballer and for the standing he has attained across the world.”

The 34-year-old enjoyed incredible success during his time with Real Madrid before joining Juventus in the summer of 208. He became Real Madrid’s all-time leading scorer with 450 goals in 438 appearances. He has also won four Champions League titles and two LaLiga trophies among other honours at the Santiago Bernabeu.

Ronaldo believes Maurizio Sarri’s Juventus are poised to conquer Europe, sooner rather than later. He told Marca: “After winning what I won at Madrid I needed a change and new motivation. I still have the strength to keep winning.
Juventus will win the Champions League. I don’t know if it’ll be this year or the next, but it’s coming.”
He scored 28 goals in all competitions last season, 21 of those coming in Serie A. He helped the Italian giants to their eighth successive Serie A crown in 2018-19.

Cristiano Ronaldo further told the reporters at the awards ceremony: “I felt sorry when I left Real Madrid. I miss both [Manchester and Madrid] but because of life’s circumstances I have lived more years in Madrid, my children and my girl were born here, so I miss Madrid more.”

“This trophy will be in a very nice place in my museum. Madrid is special, I travel a lot but there are few cities like Madrid. Much of this award is derived from what I did in Madrid. It is a Spanish trophy and leaves me very honoured.
Thanks to all those who have helped me to achieve it. It is a pride for me.
And I hope to return to Madrid soon.”

Previous articleManchester United reportedly held talks with Juventus over a potential Dybala-Lukaku swap deal
Next articleWorld Test Championship, a total of 71 Test matches will be played over a period of two years to get the champions