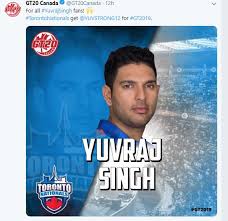 Yuvraj Singh’s knock was laced with 2 sixes and 4 boundaries in his 26-ball 45.

Other than Yuvraj Singh, Rodrigo Thomas (65) and Kieron Pollard (52) also hit fifties to take their side to another big total of the tournament.

Former Indian all-rounder Yuvraj Singh continued to impress with the bat as he smashed 26-ball 45 to help Toronto Nationals set a target of 217 against Winnipeg Hawks in the 7th Match of Global T20 Canada at Brampton on Monday.

Yuvraj Singh’s knock was laced with 2 sixes and 4 boundaries in his 26-ball 45 before being falling to Kaleem Sana in the 13th over of the game. Sana bowled a slower ball that nipped back in as Yuvraj Singh got an inside edge to that while trying to play it to the third man.

We witnessed some shots of Vintage Yuvraj Singh before he fall prey at 46 in th Global T20 Canada. However he did not started well, in the first match he was merely able to score 14 runs of 27 deliveries. Yuvraj was criticised a lot after that he came up with a much better performance.

This was not the first time that Yuvraj Singh entertained his fans in the Global T20 Canada. Before this, he scored 21-ball 35 that helped Toronto Nationals secure a two-wicket victory over Edmonton Royals in their 2nd match of league.

The former India-all rounder was, criticized in the opener of the league for his slow approach. Yuvraj was struggling with a back issue as he made just 14 from 27 balls in National’s first game.

However, Yuvraj Singh came up with much-improved effort in Toronto Nationals rest of the matches.

After winning the toss, Winnipeg Hawks opted to bowl against Toronto Nationals. Chirag Suri and Heinrich Klaasen fell in the first 5 overs as Rodrigo Thomas and Yuvraj Singh heroics helped the Nationals get past 200.

Yuvraj Singh is playing in the Global T20 Canada after announcing his retirement from international cricket and the Indian Premier League.

However they were not able to defend the total as Winnipeg Hawks took the match to the end and clinched a last ball win. The Hawks lost two wickets in the ultimate over. Crhis Lynn was the player of the match with his 89 runs of 48 balls which took his team past victory.

You are a superstar, says Yuvraj in a letter to Kohli, gifts PUMA’s golden boots

IPL: The costliest XI of all time