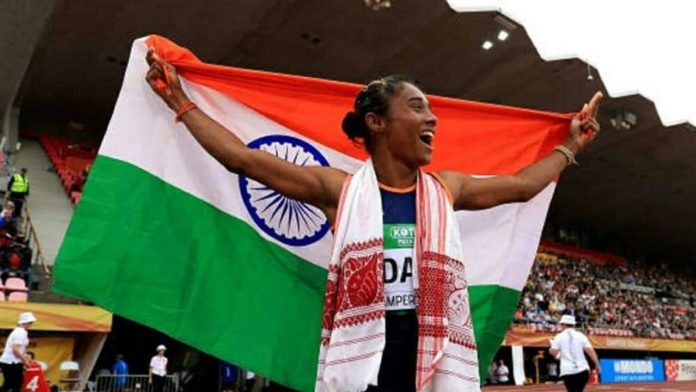 Hima Das was born on 9th January 2000. She is nicknamed as the Dhing Express. She is an Indian sprinter from the state of Assam. She holds the current Indian national record in 400 meters with a timing of 50.79s that she clocked at the 2018 Asian Games in Jakarta, Indonesia. She is also the first Indian athlete to win a gold medal in a track event at the IAAF World U20 Championships.

Hima Das has set the internet on fire with the golden run that lasted for 19 days – 2nd July 2019 to 20th July 2019. During this period, she did everything right and won five Gold medals in the process. It is a feat which is almost unheard in track and field history of India. And deservingly perhaps, she is the Golden Girl of India.

Hima Das with her incredible achievement received praise from not only the Prime Minister but also the President and top Bollywood and sports personalities. She replied to every tweet thanking them for the good wishes with a promise to work even harder.

Hima Das still needs to make the cut for World Championships, and from there on, work harder than ever before in order to claim a prestigious ticket for the Tokyo Olympics 2020 to carve out a reputation for herself as one of the world’s top athletes.

When Yuvraj Singh scored 6 sixes off Stuart Broad’s bowling during ICC T20I World Cup 2007, the left-handed batsman was rewarded 1 crore for his flamboyant batting. Likewise, Hima Das won five gold medals on the trot and she too deserves a big reward for her achievement. Cricket isn’t the only sport in India.