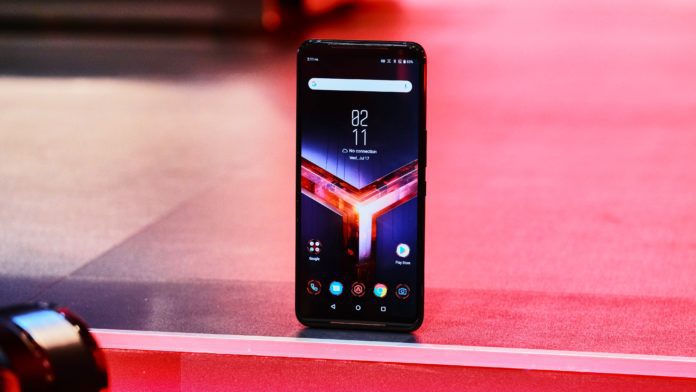 There are big competitions, reputed players, streamers and whatnot, this is driving a big revolution in the smartphone market. Now every reputed smartphone brand has its own gaming smartphone and as we know ASUS, the Taiwan giant is a world leader in the gaming industry, it also owns its own ROG Phone gaming smartphone.

Last year we did get the ROG Phone, and finally after a lot of speculations the successor to the series has arrived – the ROG Phone 2. It was previously thought to be powered by the 7nm Snapdragon 855, which is common in every flagship device these days.

A few days back Qualcomm announced its new and refined Snapdragon 855 Plus SoC with not much huge improvements but yes, it has some extra tweaks that make it an ideal SoC for gaming smartphones. The ROG Phone 2 uses this blazing fast SoC and stands out to be the fastest one out there.

Now talking about the specs of the device, the ROG Phone 2 comes with a 6.59-inch Full-HD+ AMOLED screen. It is the first smartphone to feature an AMOLED panel with 120Hz refresh rate and 1ms response time.

ASUS did achieve a lot with this device by implementing a 120Hz refresh rate screen from 90Hz, seen on its predecessor that too retaining the AMOLED display. Now the design of the smartphone bears a lot of similarity from the original smartphone having the same premium metal and glass build.

The grip of this device is expected to be the same from last year and also carry the improved ultrasonic Air Triggers gen 2 and the advanced haptic from the original ROG Phone 2.

With optimizations to the Android core, ASUS does claim that it has achieved lower touch latency than the flagship iPhone XS Max. But ASUS is still stuck with the huge top and bottom bezels which has been minimally trimmed but somewhat reduced when compared to the original smartphone.

Being powered by the latest 7nm based Snapdragon 855+, it maximizes the smartphone’s gaming performance. This gaming device is paired with up to 12GB RAM and up to 256GB storage. It also runs on the cut-down version of original Zen UI 6 seen on the Asus 6Z.

You can switch from ZenUI Classic to ROG UI to apply various skins and improve the look and feel of the device. The Game Center found on the original ROG Phone has been renamed to Armory Crate which basically does the same job of showing RAM, CPU usage also device temperatures.

With it, you can even control fan accessories and control the light-up ROG logo seen on the rear end of the device.

Coming to the cameras, Asus never really cuts down the camera for a gaming smartphone. So, this one too bears the same camera configuration that the Asus 6z brings to you.

It bears a primary 48MP with f/1.79 aperture lens and a secondary 13MP ultra-wide-angle lens on the rear side. On the front, we have a 24MP/4C selfie camera, specially designed for the comfort of gamers while streaming.

Talking about the thermals, which is the most essential part of any gaming device, Asus has again aggressively designed it for better cooling. It has tri-cooling approach – a vapour chamber, copper heat spreader, and graphite pads on the inside for better heat dissipation.

Also, there’s a new Aeroactive Cooler fan attachment, which has been redesigned to offer a quieter experience. It also helps to reduce the temperature by up to 5 degrees.

The best feature of the ROG Phone is the huge 6,000mAh battery. Asus says that you can play up to 10 hours of PUBG Mobile with a single charge which is just amazing! It comes pre-included with 30W HyperCharger in the box which can charge a 4,000mAh battery in just an hour.

The ROG Phone 2 still has dual-USB ports (one at the bottom and one on the side), a 3.5mm headphone jack and a bunch of gaming accessories that enhance the gaming experience. The antenna placement on enables low-latency, high-throughput Wi-Fi connectivity.

Additionally, there are four microphones on this device for better sound reception. The ROG Phone 2 boats of dual front-facing stereo speakers with DTS:X Ultra support that can simulate multi-channel audio. This new gaming smartphone has larger sound chambers than the first-gen ROG Phone making them 2.5x louder than the last-gen.

Honestly, we have seen a huge improvement in the ROG Phone especially in he performance, battery and display, other essential features have been improved for the better gaming experience.

But now it will be interesting to see how ASUS prices the device against the likes of other gaming smartphones in the market.