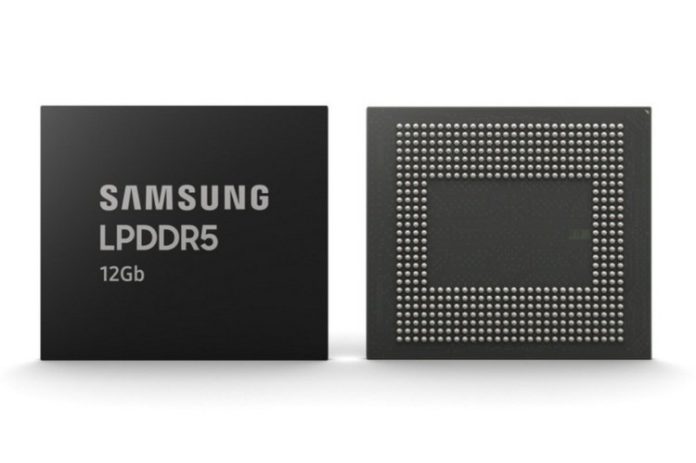 Electronic giant Samsung this day announced that it will be mass-producing industry’s first-ever 12GB LPDDR5 mobile DRAM. This leverages AI and 5G features in future smartphones.

This LPDDR5 memory has been built on the second-generation 10-nm class process, and Samsung plans to start mass-producing 12GB LPDDR5 packages from later this month, each combining eight of the 12GB chips.

Samsung even claims that the new 12Gb LPDDR5 memory supports a data rate of 5,500 megabits per second (Mb/s). This is up to 1.3 times faster than the current-generation LPDDR4X memory with 4266Mb/s transfer speed.

The company also promises that the new memory will draw 30% less power even operating at high memory speeds by integrating a new circuit design. Apart from powering gaming smartphones, this memory module can also pave its way for next-generation flagship smartphones.

Now depending on the demand, Samsung might be transferring its 12GB LPDDR5 DRAM production unit to its Pyeongtaek (Korea) campus expectedly by next year to manage better production. Samsung is also preparing a 16GB LPDDR5 memory for launch to solidify its competitive edge in the global memory market.

Do check out: DDR4 RAM prices decrease even more, by up to 40 percent.

Previous article
TECNO Phantom 9 is launched at just Rs.14,999.
Next article
Samsung Galaxy A80 will be available in India soon via Flipkart.