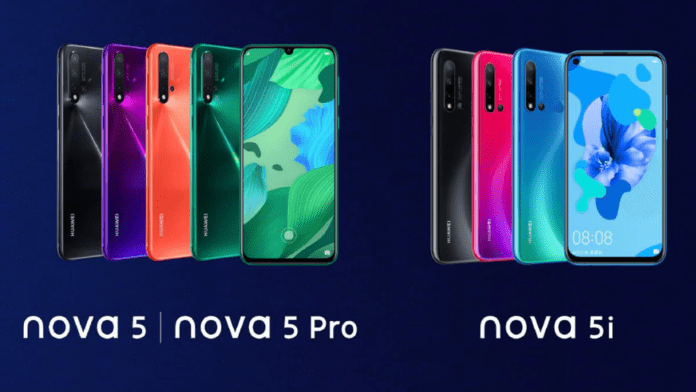 Huawei announced the Nova 5 series on 21st June at a lengthy event in Wuhan, China. The family consists of three phones, but the most impressive device of all is the nova 5 Pro – pretty OLED on the front, cool design, and powerful internals. During the presentation, Huawei played the promo video of the series, and later it is now uploaded on the social media channels.

The dual-SIM (nano) Huawei Nova 5 and Nova 5 Pro run on Android 9 Pie with EMUI 9.1.1 and pack a 6.39-inch full-HD+ (1080×2340 pixels) OLED screen with 19.5:9 aspect ratio, an in-display fingerprint sensor, and DC dimming support. The Huawei Nova 5 is powered by the octa-core Kirin 810 SoC, whereas the Nova 5 Pro will come with octa-core Kirin 980 SoC. The two phones pack 8GB of RAM and up to 256GB of onboard storage, which uses Huawei’s EROFS filesystem. EROFS offers 20 percent better performance than the EXT filesystem that is present on many Android smartphones.

Among other specifications, you will get a 3,500mAh battery with 40W fast charging support. The Nova 5 Pro also includes NFC support, which is not present in the regular Nova 5. There is a microSD card slot (up to 256GB) present on both phones as well.

Specification details of Nova 5i :

Tell us how much you liked the Nova 5 series in the comments section below. For latest Tech & Sports Updates hit the bell icon and Subscribe to our website TechnoSports. For more information visit our website, TechnoSports. And download our app from the Google Play Store for more real-time updates. To download our TechnoSports app click here.