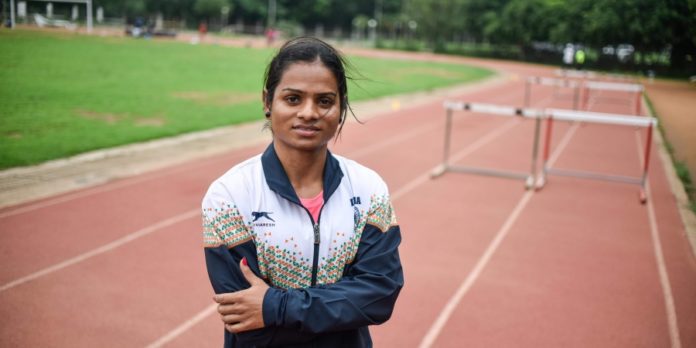 Dutee Chand became India’s first athlete to come out and openly declare herself as a member of the LGBTQ community.

Dutee Chand is India’s fastest woman. She is just about 5 feet 6 inches – which is short considered she is a sprinter. But at only 23 years of age, she has fought odds worse than most people, even international-level athletes can imagine.

When Dutee was just 18 years old, she was at the forefront of the debate surrounding hyperandrogenism – a condition where the female body produces high levels of testosterone. She was banned from competing by the International Association of Athletics Federations because of the condition. She took her case to the Court of Arbitration for Sport in 2015 and won a landmark case that allowed her to compete as a woman. She cleared the way for other athletes with hyperandrogenism to also compete.

“There are no rules for men but for women there are so many tests: why is your hormone count so high, how much is your body fat, how much is your height, they check everything. But not every human body can be the same, the development of a human body differs even from country to country and athletes are made depending on that development. Like a lot of good athletes come out from countries like America and Jamaica, but we can’t even reach that level,” she said while talking on the sidelines of the launch event for Skechers GoRun 7 in Mumbai.

Dutee Chand has now made a big revelation last month. The 23-year-old sprinter shattered a taboo in India by disclosing that she is in a same-sex relationship. She became India’s first athlete, male or female, to come out openly. She revealed she faced backlash from her family and came out only after blackmail from her sister. She said: “I’ve already told everyone how much stress my sister gave me. I couldn’t train properly at least for 10-15 days after that. But now, I’m starting to forget everything and getting back to my training. I’ve received a lot of support from the public and it has made me feel comfortable”.

The Indian Supreme Court struck down the British-era law on homosexuality as late as 2018 but homosexuality still remains taboo in the country. So coming from a poor family of weavers in Chaka Gopalpur, a village in Jajpur district of Odisha, to admit being in a same-sex relationship would take a lot more courage than running down the distance of 100m in the high-pressure Olympics. But the 23-year is made of far stronger stuff. She fought, or rather ran, her way from a small village to being a global trailblazer for women athletes. She does not shy away from using her voice to call out the sport’s sexism and her country’s double standards for women.

“When you go to any event, athletes look at you in a way that you’re not an athlete. You feel a lot then. As if being an athlete is already not stressful enough, life becomes even more stressful with this,” Dutee said but with a smile.
She further added: “It was difficult for me at first. In Odisha or the world, people don’t follow rules, people follow traditions. People are orthodox in their thinking, so it becomes a challenge to make them understand. First time when this issue happened in Odisha, people spoke very badly of me. But slowly when they started reading positive things on newspaper and TV, people starting understanding.
I didn’t expect anything. I thought that people might speak ill of me after I spoke about it because I’m an athlete and a celebrity, and maybe it will affect my game again like in 2014. But by God’s grace, there’s been no such thing. Athletics Federation of India, Sports Authority of India, everyone has supported it, saying it is your personal life and no action will be taken due to it. In fact, they told me to train well”.

Dutee believes in the burning desire to – in colloquial words – let haters hate. She said: “When someone speaks ill of me, I feel a sense of jealousy from inside. I also get angry. Jo bolte hai na, haat se nahi maar sakte toh chawal se maro [roughly translated to ‘if you can’t hit someone with your hand, throw something at them]. I can’t hit people with my hand, but I will do some things that will want people to try and hit me but they won’t be able to. That’s how I become strong. The more people speak bad about me, the more I focus on my training.”

From hyperandrogenism to homosexuality, Dutee Chand is thankful for the widespread support she has received in India. She said: “I am playing for my country and whatever I do it is for my country. The support and good wishes that I have received gives me the confidence to keep fighting.”

The 23-year-old sprinter is up next for the World University Games on 28th June in Italy. She is training for the competition, but wishes she could have done more in her preparation. She wants to focus more on finishing her races as she starts well but loses steam midway.

Previous articleShakib al Hasan, Liton Das played a masterclass and took Bangladesh past victory.
Next articleASMedia to produce AMD B550 and A520 chipset motherboards based on PCIe 3.0 in 2019