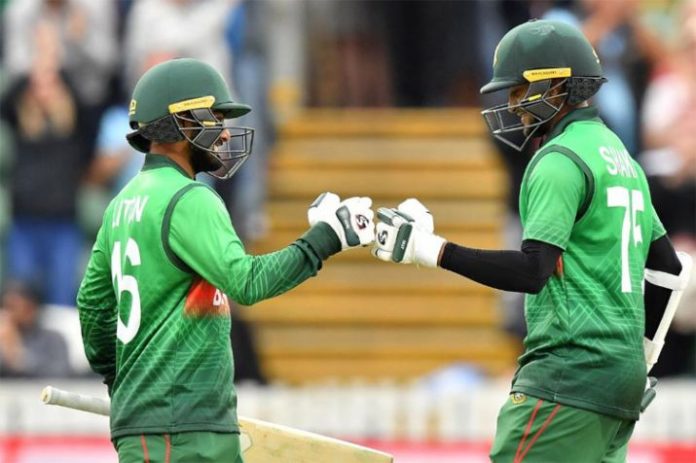 Shakib was equally fluent on front and back foot, and even good balls were not spared. Right from the beginning, his timing was top-notch, which provided him the early momentum and Bangladesh’s newly-appointed No 3 never looked back from there.

Litton has smashed the winning runs with a pull to the square leg boundary. Huge win for Bangladesh and quite a bad result for West Indies. Bangladesh win by 7 wickets.

Shakib Al Hasan said that Bangladesh are playing cricket at a different level and credited the team management for keeping them calm in the dressing room.

Bangladesh began their World Cup 2019 campaign on a perfect note as they defeated South Africa in their opening game, but two successive defeats – against New Zealand and England – and shared points with Sri Lanka, have pushed them on to the backfoot.

Bangladesh bounced back in style as they chased down the 321 posted by West Indies in clinical fashion and made sure their win against South Africa was not considered a fluke.

“I will say it’s a whole new level [for us],” Shakib said after Bangladesh’s seven-wicket win on Monday (June 18).

“I personally think those matches in Ireland helped us a lot. Because we won every match chasing there and at no point it seemed that we are batting under pressure and we have to play big strokes.

In a run-chase of 322, following a brisk start when Soumya Sarkar got out to a short ball off Andre Russell, West Indies were eyeing to get the control back. Caribbean skipper Jason Holder set a very attacking field to the next man, Shakib.

The Windies think tank was aware of the fact that fitness-wise, the Bangladesh all-rounder was not at his best. He was supposed to miss the previous fixture against Sri Lanka in Bristol, which was eventually washed out. Hence, despite his rich form, Shakib was needed to start from scratch in this run chase. Furthermore, at that point, there was a mild but steady drizzle and the light was not that great either.

Bangladesh registered their 2nd victory in the World Cup. They are now at the 5th position in the points table.