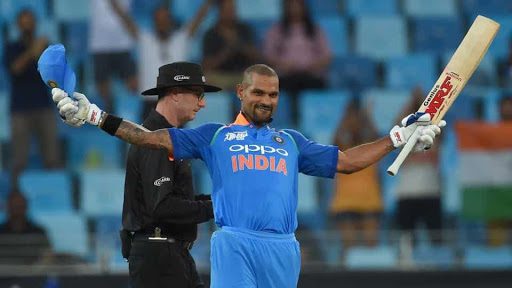 India won the toss and elected to bat against Australia. It is a good pitch to bat on and India fully utilized the batting oppertunity.

The left-handed Dhawan put on 127 runs with opening partner Rohit Sharma as India reached 190 for one in 33 overs.

Dhawan was finally dismissed for 117 by Mitchell Starc in the 37th over. Dhawan and Sharma took the attack to the reigning champions’ bowlers after a cautious start against the Australia new-ball pair of Pat Cummins and Mitchell Starc.

Nathan Coulter-Nile finally struck in the 23rd over, having Rohit caught behind after the opener recorded his 42nd ODI fifty.

During his knock, Rohit Sharma became the fourth batsman in world cricket to hit 2,000 ODI runs against Australia.

Indian skipper Virat Kohli batted till the end and made 82 runs.

Pandya and Kohli continued the momentum smashing Australian bowlers all over the park. Pandya made a fiery 48 off 27 balls hitting three sixes and four boundaries.

Dhoni made 27 runs of 14 balls with a strik rate of 192. He hit three boundaries and a over boundary.

At the end KL Rahul hit 11 runs of three balls. It was a team game which took India past 350 mark.

In the history of World Cup 353 runs have never been chased.

To win it Australia needs to create history.