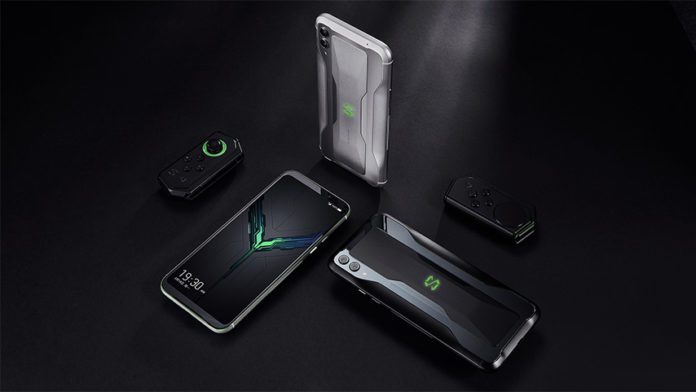 The Black Shark team just held an event in India, where it announced the arrival of its latest gaming smartphone “Black Shark 2”. The phone will arrive with two memory options and will be sold by Flipkart, starting June 4.

The handset has a 6.39” OLED panel with Full HD+ resolution and 19.5:9 tall ratio, but no notch – just a straight semi-thick bezel that houses the selfie camera and earpiece (doubling as a stereo speaker). There is a fingerprint scanner under the display and a special touch algorithm optimizing the device for gaming purposes.

The Snapdragon 855 chipset has either 6 GB RAM + 128 GB storage or 12 GB RAM + 256 GB storage. There is Liquid Cooling 3.0 that is said to lower the CPU core temperature by up to 14 degrees. The 4,000 mAh battery of the Black Shark 2 comes with 27W fast-charging that in theory offers 30 minutes of gaming with 5 minutes of charging.

Along with the smartphone, Black Shark announced a few accessories, including a USB-C to HDMI connector, a gamepad-shaped dock for the two controllers (similar to Nintendo Switch), USB-C headset, and a detachable cooling fan with different modes. The prices of these accessories were not revealed at the event but we expect to learn the same as soon the smartphone goes on sale.

The launch of the Black Shark 2 spells troubles for performance-oriented smartphones like the OnePlus 7 series as well as the upcoming Redmi K20.

However, Indian consumers usually look for a wholesome and replete package, so it will be interesting to see if they are swayed by this new trend of gaming smartphones.