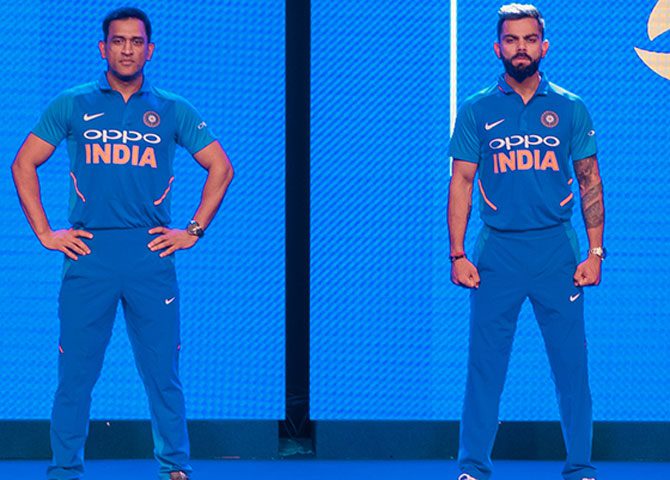 ICC Cricket World Cup 2019, to be played in England and Wales, will be contested by 10 teams.

India’s 15 man squad for the upcoming ICC Cricket World Cup in England and Wales was announced at the BCCI headquarters in Mumbai on Monday (April 15).

KL Rahul and Ravindra Jadeja have been included in the squad.Dinesh Karthik has also found place in the squad.

The team will be captained by Virat Kohli while Rohit Sharma will be his deputy.

MS Dhoni is the first-choice wicketkeeper.

Khaleel Ahmed, Deepak Chahar, Navdeep Saini and Avesh Khan have been selected as the net bowlers helping the Indian cricket team during the World Cup. The four bowlers will travel to the UK with the rest of the team.

There are no surprises with the pace department with Jasprit Bumrah expected to lead an attack that can include all-rounder Hardik Pandya, Bhuvneshwar Kumar and Mohammed Shami apart from wrist spin duo Kuldeep Yadav and Yuzvendra Chahal.

The outing at the Kennigton Oval will go beyond experimenting with their highly skilled bowling attack, and quite a bit of focus will be on KL Rahul and Vijay Shankar, contenders for the number .

Kohli’s men, second behind England in the one-day international rankings, will start the tournament among the favourites alongside the host nation and defending champions Australia.

In Rohit Sharma and Shikhar Dhawan as openers followed by Virat Kohli, India have one of the finest and potent top three in the world. Veteran Mahendra Singh Dhoni, all-rounder Kedar Jadhav and the big-hitting Hardik Pandya provide depth to the line-up.

Opponents will observe the ability of India’s seamers to exploit the conditions, which could be the most important factor going ahead.

Jasprit Bumrah, the top-ranked ODI bowler in the world, leads the pace battery alongside Mohammed Shami, Bhuvneshwar Kumar and Hardik.

vs New Zealand on May 25

vs Bangladesh on May 28

vs South Africa on June 5

vs Australia on June 9

vs New Zealand on June 13

vs Pakistan on June 16

vs Afghanistan on June 22

vs West Indies on June 27

vs England on June 30

vs Bangladesh on July 2

vs Sri Lanka on July 6