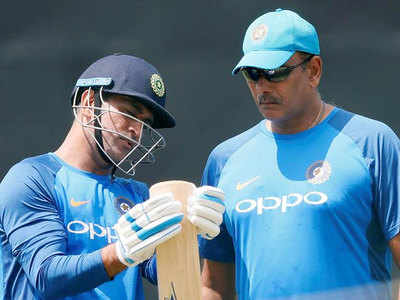 A day before heading to England for the upcoming World Cup, coach Ravi Shastri said MS Dhoni will play a major role in boosting India’s bid to regain the title, harping on the veteran’s ability to influence the game’s little moments.

Shastri has faith in Dhoni’s ability to influence the game’s little moments.

Dhoni is speculated to feature in his final World Cup. He was in supreme form in the recently-concluded Indian Premier League. The 37-year-old scored 416 runs at an average of 83.2 in the last IPL. Led Chennai Super Kings to the final and the coach said that he was impressed with the former India skipper’s footwork during IPL 2019.

Ravi Shastri also said MS Dhoni is the best wicketkeeper in the world in the 50-over format.

“It is great to see the way he was moving in the IPL especially when he was batting. The footwork, the power in the shots, he will be a big player in this World Cup,” Shastri said.

For the first time since 1992, the World Cup is being played in a round-robin format.

MS Dhoni the 2011 World Cup-winning captain, has been the go-to man for Team India cricketers including current skipper Virat Kohli. MS Dhoni’s abilities to read the game from behind the stumps. Guide the players make him an indispensable part of the team.

“It will be very challenging. If you look at 2014 and 2019 now, the gap has become closer between the teams” Shastri said.

Dhoni’s knack to pull off no look run outs and brilliant stumpings makes one of the finest stumpers in world cricket. And coach Shastri said he has shown that there is no one better than him.

Dhoni will be featuring in his fourth World Cup. A veteran of 341 One-Day International (ODI) matches, Dhoni has amassed 10,500 runs at an average of over 50. He also holds the highest score of an unbeaten 183. Dhoni will be a vital man in the middle order for the national team.