After Jio’s 1500 Smartphone Airtel has planned to counter Jio with its effectively RS 1399 “touch” smartphone. Indian Smartphone maker company Karbonn will be developing these phones. The phone is named as Karbonn A40 Indian, which was previously priced as Rs 3200- Rs 3500. Recently Airtel has made an venture to make the phone less costlier to take on Jio’s smartphone market. Well, we have brough

t you the specs and the conditions for this offer.

Airtel notes that while the Karbonn A40 Indian normally costs Rs 3,499 it will be offering the 4G smartphone effectively at the price of a feature phone by bringing a tariff plan into the mix. The telecom network also adds that the “ownership of the smartphone is completely with the customer and there is no need to return the device to Airtel/Karbonn at any point to claim the cash benefit.” Basically Well let’s see the specs of the phone :

The Karbonn A40 Indian runs Android 7.0 and is powered by a 1400mAh removable battery. The phone has a 4.00-inch touchscreen display with a resolution of 480 pixels by 800 pixels.

The Karbonn A40 Indian is a dual SIM (GSM and GSM) smartphone that accepts Micro-SIM and Micro-SIM. Connectivity options include Wi-Fi, GPS, Bluetooth, USB OTG, FM, 3G and 4G (with support for Band 40 used by some LTE networks in India). Sensors on the phone include Accelerometer. 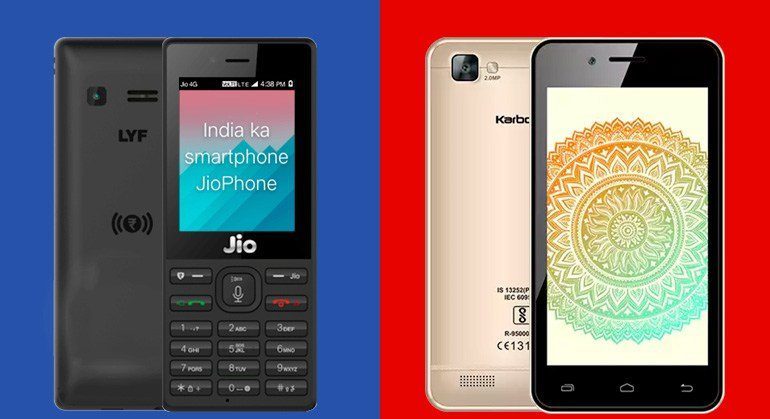 To be very honest with specs Airtel beats Jio. But the price and cashback scheme of Airtel is a bit odd one. Well If I had to buy a phone between these two I would have preferred Karbonn A40 I

ndian which has all the specs of a true smartphone. The 1gb RAM AND THE Android Nougat is the big difference between the two. Maybe there maybe a price difference but giving 1300 bucks and buying a Indian Brand Smartphone would be my preferred choice. Also monthly plans wouldn’t differ much. Jio and Airtel gives the same features of calling and 0.5 gb a day, for Rs 149 and the latter prices it for Rs 169.